By: Maria Thompson Corley – Confluence Daily is your daily news source for women in the know.

I wrote a Facebook post complaining about the Grammy for Album of the Year going to Bruno Mars for 24 Karat Magic. I’ve gotten both entertainment and amusement from that CD, which accomplishes Mars’s stated purpose, at least in my case: to make people joyful, and to get them to dance. That said, the whole recording is about nothing. There are clever turns of phrase, but not a single thought-provoking idea, deep emotion (“Goodbye” is a plea for reunion, but a very generic one), or innovative musical moment (much as I appreciated the extended trip down various Memory Lanes). My final point was going to be that, while the CD predates #MeToo and #Time’sUp, it seems incongruous with the current zeitgeist in its unabashed objectification of women. I held back because, having just done my first official modeling gig, which involved showing a lot of leg and several come-hither expressions, I felt a tad hypocritical. I’ve long had a contradictory relationship with the beauty industry. On one hand, I think physical beauty is meaningless, revealing nothing other than our genes, our talent with makeup, and/or the skill of our plastic surgeon. Having a fit body does require work, however, no amount of working out can give a person long legs. On the other hand, humans are hard-wired to respond to whatever beauty standard currently prevails (and beauty is cultural and dynamic, though the internet has made the standards more and more similar, if my brief exposure to last year’s Miss Universe pageant is any indication). But on yet another hand (work with me here), I can’t say I’m immune to such things, as a longtime admirer of the male form and subscriber to both Vogue and Elle. Which have excellent articles, but are mainly about pretty people in pretty clothes.

My modeling job came completely out of the blue. I’d gone consignment shopping with two friends, and the owner of the shop asked me if I’d allow myself to be photographed in formal wear. I was flattered — I’m almost 52, and while I used to be rail-thin, I’m more womanly now, shall we say. Since I’ve historically been very self-conscious, doing the shoot was a way to see how far I’ve come towards “owning it,” whatever it is. I was gratified to find that posing while playing dress up felt so natural.

I shared some of the pictures on Facebook, and got a lot of lovely comments. I was happy to promote the boutique; the owner is a fellow Canadian, and she’s one of the nicest people I’ve run across. And as a woman over 50, I’m kind of invisible, most of the time. So declaring that there’s life in the old girl yet felt good… A vague feeling of unease

…until I started to feel uncomfortable. After all, wasn’t I emphasizing something both fleeting (see picture of me at 28) and unimportant? True, I was doing it at someone’s request. But still, was it really okay to say, “Look at me!”? In my youth, I never went out without makeup. These days, I truly can’t be bothered, unless I’m performing (I’m a concert pianist/church organist). First of all, I’m always rushing in an effort to keep up with the demands of raising an autistic teen, practicing, and the other myriad duties and attempts to get freelance income that I have on my plate. Second, after years spent hiding from men post-divorce, I’m honestly not trying to attract anybody (the reasons would require a whole other essay). I don’t need makeup to feel good about myself, and I don’t want people to relate primarily to my exterior. By posting my pictures on Facebook, I felt like I was giving the opposite message.

The thing is, I know that the vast majority of the people complimenting my picture know me on a personal level. I also know that when I see someone else’s flattering picture, all I think is, “Wow, ____ looks great!” Which doesn’t matter, at least, not on a deep level. It’s just a statement of what I perceive to be a fact.

Part of the problem?

The world is superficial. Am I part of the problem if I accept another photo shoot? Then again, why is it a big deal? The first wave of feminism identified with throwing off the things that allow men to objectify us. But the sexual harassment and opportunity inequality that #MeToo and #Time’sUp are fighting has nothing to do with how women look. Put differently, no matter how high the slit in my skirt, no man has the right to put his hand up it uninvited, and my lack of an invitation should never cost me a job. Besides, you don’t have to be wearing a slit skirt to get harassed. Finally, we discourage children from thinking they can have whatever looks good to them without permission. Shouldn’t grown men be held to at least the same standard?

When I got home from my shoot, my daughter — who undoubtedly never has these sorts of internal debates when she gets her picture taken — asked, “Did you have fun?” Well, yes, I did. Pretty dresses and high heels tapped into a side of me that has been dormant for a long time (I won’t revisit the four inch stilettos anytime soon, though, except for photographs. They’re ridiculous. But that’s another essay). I felt like I was giving myself permission to be myself. Just like I give myself permission to be myself when I leave the house with no makeup. Both are a part of me. And that’s perfectly okay.

Meghan Markle’s Blackness: The Lot of Black People Hasn’t Changed Just Because a Woman With African Heritage Has Joined the British Royal Family 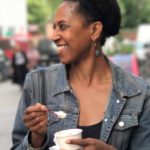 Maria Thompson Corley is a Canadian pianist (MM, DMA, The Juilliard School) of Jamaican and Bermudian descent, who has experience as a college professor, private piano instructor, composer, arranger and voice actor. She has contributed to Broad Street Review since 2008, and also blogged for Huffington Post. Her first novel, Choices, was published by Kensington. Her latest novel, Letting Go, was published by Createspace, along with a companion CD of solo piano performances by the author. “Malcolm,” a poem about her son which she presented at the 2016 National Autism Conference, is featured periodically on the Scriggler All Stars Twitter page. “Drop Your Mask” was awarded second place in New York Literary Magazine’s love poetry category and appeared in that publication’s AWAKE anthology in December, 2016. Her short story, “The Road to Jericho,” is slated for publication in the inaugural edition of Midnight and Indigo.

The Magical Healing Power of the Humble Nap

M.J. Hegar: This Woman is Running for...