Home Informed CNN: The guardrails are off the Trump presidency
Informed

CNN: The guardrails are off the Trump presidency

That apt mission doctrine for a presidency blazing with abuses of power, conflicts of interest and unhinged behavior is the work of White House acting chief of staff Mick Mulvaney, whose barn burner of a briefing on a day of political train wrecks, staggering misdirection and reality bending sent a clear message.
Democrats can impeach President Donald Trump, Republicans can bemoan his betrayal of the Kurds and the media can fact-check him till the cows come home — but nothing is going to restrain or moderate him. In fact, he’s becoming ever more incorrigible.
The President’s brazen willingness to do exactly what he wants — key to his appeal to voters angry with the political establishment in 2016 — shone through a wild few hours that briefly stole the spotlight from the Democratic impeachment inquiry. 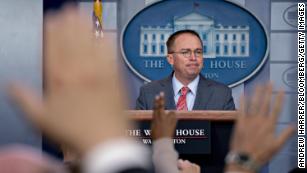 Mulvaney brashly admits quid pro quo over Ukraine aid
First, Mulvaney blew away the cobwebs in the White House Briefing Room by announcing that the President would hold next year’s G7 summit at his Doral resort in Florida.
Even for an administration that has redefined the concept of conflicts of interests, this is a staggering move. Mulvaney insisted with a straight face that Trump would not profit from the summit, even though millions of dollars from foreign delegations will flood into the coffers of the struggling resort and bring a worldwide branding boost.
Then Mulvaney made an even more unabashed declaration, admitting that Trump did freeze nearly $400 million in aid to coerce Ukraine into investigating his Democratic opponents.
“Get over it. There’s going to be political influence in foreign policy,” Mulvaney said, coining an instant classic phrase that will help historians understand the story of Trump’s presidency. Trump’s time in office embodies a defiant repudiation that this presidency should be subject to conventional standards of ethics and accountability.
Acosta: Mulvaney’s message is ‘catch us if you can’ 04:02
The remark was so striking because suspicions that Trump had abused his power by pressuring Ukraine to fulfill his political wish list are at the center of the Democratic impeachment investigation of the President.
The President’s blindsided lawyers may be behind a walk-back statement later issued by Mulvaney, in which he denied a quid pro quo with Ukraine, accusing the media of distorting comments he had made on live television — where he had clearly been asked whether the administration had withheld funding for Ukraine for an investigation into the Democratic National Committee server and responded affirmatively.
The administration’s approach — including Mulvaney’s denial — seems to be rooted in a belief that conduct that would normally be viewed as corrupt or impeachable is just fine as long as it unfolds in full public view. It was much the same when Trump appeared on the South Lawn of the White House earlier this month and called on China to investigate former Vice President Joe Biden and his son.
Such behavior is a lesson that when a politician is prepared to remove a fundamental underpinning of shame and ethics from his political personality, there’s almost no limit to his destructive political behavior.

‘A great day for civilization’ 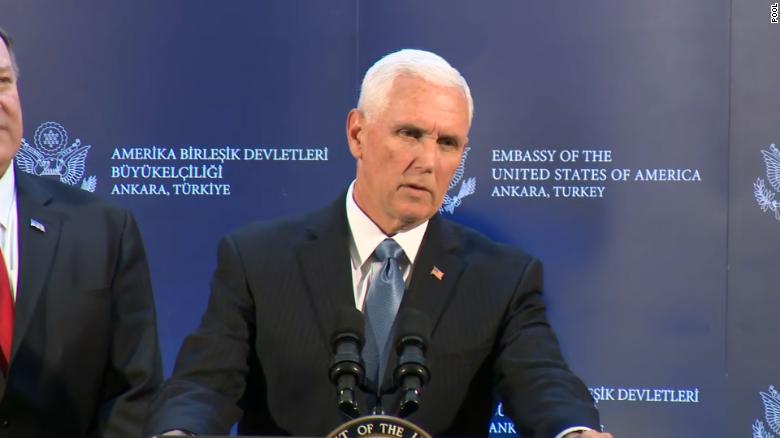 Pence announces Syria ceasefire that appears to give Turkey everything it wants
As Mulvaney combusted on live TV, Vice President Mike Pence and Secretary of State Mike Pompeo were in Turkey preparing to unveil a ceasefire deal over its incursion into northeastern Syria after talks with President Recep Tayyip Erdogan.
“This is a great day for civilization,” Trump proclaimed on Twitter. His victory was hollow, however, since the deal is merely aimed at tempering a military and humanitarian debacle. And just hours after Pence announced the ceasefire, Turkey was accused of violating it as clashes, including shelling and artillery fire, continued on the border between Turkey and Syria, according to eyewitnesses and Kurdish fighters.
Pence, characteristically, ladled on praise for Trump in announcing a deal that appears to give Turkey everything it wants and to enshrine the betrayal of Kurdish anti-ISIS fighters, who the US has committed to escorting out of the border region.
Democratic Rep. Eliot Engel of New York, the chairman of the House Foreign Relations Committee, condemned the administration’s efforts to frame a disaster as a triumph.
“The immediate cause of this crisis was President Trump’s betrayal of our Kurdish partners, which set into motion a humanitarian crisis, a resurgence of ISIS, a strategic victory for Russia and Iran, and irreparable damage to America’s standing in the world,” Engel said in a statement.
“The President is an arsonist who later pretends to be a fireman.” 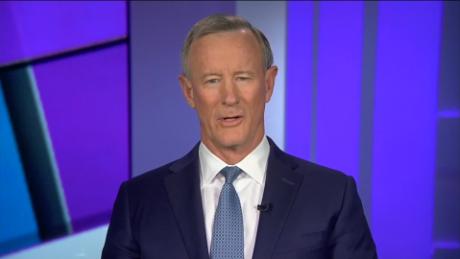 Retired Navy Admiral: Our republic is under attack from President 05:02
Retired Adm. William McRaven, who oversaw the special forces raid that killed Osama bin Laden in 2011, has just penned a New York Times op-ed titled “Our Republic Is Under Attack From the President” and is accusing Trump of devastating American’s constitutional infrastructure.
“If you want to destroy an organization, any organization, you destroy it from within. You destroy it from without. Then what you do is you convince everybody you’re doing the right thing,” McRaven told CNN’s Jake Tapper on “The Lead” on Thursday.
McRaven accused Trump of undermining the intelligence community, law enforcement, the Department of Justice, the State Department, the press, America’s Kurdish allies, its NATO friends and international treaties.
“I think Trump forgets that we are a nation of values. That we are not just transactional. He’s a transactional President,” he said.
Normally, it would be remarkable for an American military hero to make such a comment. But such is the tumult whipped up by Trump that his words will probably just get lost in the cacophony.
And it’s not just McRaven who is concerned.
Some congressional Republicans are privately alarmed about Trump’s conduct this week and what House Speaker Nancy Pelosi called a “meltdown” at the White House on Wednesday.
A source with knowledge of the meeting told CNN’s Jamie Gangel that participants were “shell-shocked” and “shaken” by the President’s behavior.
Thursday’s turbulence took the already manic absurdity of the last few weeks up a few notches. After all, Trump ignited an international crisis by paving the way for Turkey’s Syria invasion — and in a bizarre reality-show stunt at the White House tried to bring together a British family with the wife of a US diplomat involved in a car crash that killed their son.
This week’s turmoil has unfolded as the Democratic impeachment inquiry has raced ahead, acquiring damning testimony about an off-the-books foreign policy operation in Ukraine involving Rudy Giuliani that some alarmed officials feared broke the law.
In the latest blockbuster testimony, the US ambassador to the European Union, Gordon Sondland, spent 10 hours before three House committees on Thursday.
The hotelier and Republican donor said he had been directed by Trump to work with Giuliani — who was trying to dig up dirt on Biden — in Ukraine.
Sondland’s testimony, in an opening statement provided to CNN, shows Trump put on hold an effort to strengthen relations with Ukraine until top US officials were in contact with Giuliani.
Revelations about Trump’s back-door Ukraine policy shop may have been one reason why Mulvaney decided Thursday to make such a public omission, even if he later walked it back.
But they are yet another indication of Trump’s determination to subvert the conventions and guardrails that have governed the presidency for generations.

It was time for me and my body to be friends.

What’s Wrong with Having a Good Relationship...