The World Health Organization has increased its Covid-19 risk assessment to “very high at a global level,” as nearly 50 countries report cases within their borders.

“We are on the highest level of alert or highest level of risk assessment in terms of spread and in terms of impact,” said Mike Ryan, executive director of WHO’s health emergencies program. The agency isn’t trying to incite panic, he added. “This is a reality check for every government on the planet: Wake up, get ready, this virus may be on its way and you need to be ready. You have a duty to your citizens, you have a duty to the world to be ready.”

The news comes on the same day the Federal Ministry of Health in Nigeria confirmed a Covid-19 case in Lagos, the largest city on the African continent. It’s also the first reported case of the new coronavirus in sub-Saharan Africa. That brings the total number of countries with confirmed cases to at least 49 — a jump from 26 a week ago.

The new case in Nigeria is part of a broader trend that represents a turning point in the Covid-19 epidemic. On Thursday, the WHO announced that in the days prior, the number of new cases reported in the rest of the world had exceeded the number reported from China, where the virus seems to have originated. This includes large outbreaks in Iran, Italy, and South Korea.

“This virus has pandemic potential,” said Tedros Adhanom Ghebreyesus, the director general of the WHO, on Thursday. (A pandemic means a new virus is spreading in multiple regions of the world, but it doesn’t say anything about a disease’s severity.) It was the first time the agency’s director general acknowledged what other public health experts had been saying in recent weeks with increasing urgency: that we appear to be on the precipice of a pandemic, if we’re not already in one.

The Lagos case is linked to Italy’s outbreak

For weeks, health officials have warned that a worst-case scenario for the outbreak involves the disease spreading in Africa’s fragile health systems. But beyond a single case in Egypt, authorities haven’t yet identified others — which many suspect is due to undertesting on the continent.

The first reported case in Africa’s largest city suggests there will likely be more to come.

The patient is an Italian citizen who had been working in Nigeria — one of the many cases in 14 countries, as far and wide as Brazil and Spain, linked back to Italy’s outbreak. On February 25, the person returned from Milan to Lagos, according to Nigeria’s Health Minister Osagie Ehanire. The individual tested positive for the virus on February 25. 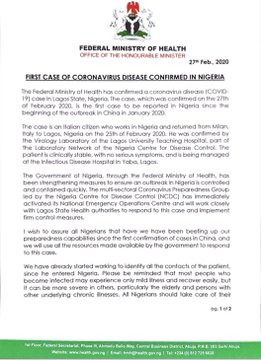 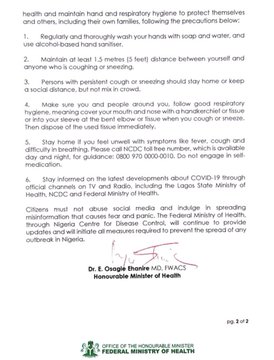 “I wish to assure all Nigerians that we have been beefing up our preparedness capabilities since the first confirmation of cases in China, and we will use all the resources made available by the government to respond to this case,” Ehanire said in a statement. The health agency was already working on tracing the individual’s contacts, he added.

“We have to recognize how well Nigeria did in handling Ebola,” said Devi Sridhar, chair in global public health at the University of Edinburgh. During the 2014-2016 Ebola epidemic, the arrival of cases in Lagos stoked fears that the virus could spread throughout the megacity and rapidly beyond. Nigeria’s public health officials managed to swiftly get the outbreak under control.

“They have world-class public health experts, so ideally they can track all the contacts for this individual and contain it quickly,” she added.

WHO’s Ryan reaffirmed that point in a Friday press briefing, noting that Nigeria has worked for years to build up its public health and disease surveillance capacity. In addition to Ebola, they’ve had experience battling back measles, cholera, and polio, among many other infectious diseases.

Why an outbreak in Lagos is so worrying

A single case imported to Lagos doesn’t mean the virus is spreading there. But health experts note that transmission is a concern in Lagos, a densely packed megacity of 21 million in a lower-middle-income country. “Given that Lagos is a large city connected to much of the world via travel, this is a concerning report,” said Jennifer Nuzzo, an infectious disease expert and senior scholar at the Johns Hopkins Center for Health Security.

“Nigeria is a vast country with a huge population and has many vulnerable people,” said Ryan, “so it is disappointing to see the disease arrive.”

And unlike Ebola — which spread only through direct contact with a person’s bodily fluids — Covid-19 is a respiratory virus and more contagious. A mere cough or sneeze appears to be enough to pass it along.

“Covid-19 isn’t Ebola. Containment [is] difficult if not impossible,” said Tom Frieden, the former director of the Centers for Disease Control and Prevention, on Twitter. “The terrifying possibility is of dozens of cities with Wuhan-like outbreaks,” he added, referring to the city in China where the virus is believed to have emerged.

First report of #COVID19 from #Lagos #Nigeria. Pandemic is coming.

Some countries have belatedly started looking for Covid-19 and discovered large outbreaks, suggesting the disease has been spreading even more broadly than it appears, undetected. Over the past week and a half, Iran went from zero cases of Covid-19 to 270 as of Friday; the country has had the second-highest number of deaths (26) outside of China.

Like Italy, cases with links to Iran have been discovered in 11 countries around the world, from Canada to Lebanon. In a yet-to-be-published study, researchers estimated there are likely at least 18,000 cases within Iran’s borders. They predict we can expect outbreaks with links back to Iran in Turkey, the United Arab Emirates, Iraq, Qatar, and Georgia, among other countries.

Until early February, only two countries in Africa had the lab capacity to screen for this disease: Senegal and South Africa. Though other countries are now scaling up, this outbreak has been going on since late last year. It’s only now that a first case is found in sub-Saharan Africa, even though it’s thought to be at particular risk given its links to China. As Frieden said of Nigeria’s case on Twitter, “a pandemic is coming.”

3 News Stories You Should Read Today...