NPR: Act Now To Get Ahead Of A Mental Health Crisis, Specialists Advise U.S.

Mental health specialists are working now to bolster the resilience of Americans who are suffering from feelings of despair — in hopes of preventing increases in suicides among people who are under increased pressure during the coronavirus pandemic.

Time is of the essence, public health researchers say. Experience with past natural disasters, such as earthquakes and hurricanes, shows that a rise in suicide often happens in the months after the immediate physical dangers of the disaster have passed.

A report jointly published last week by two foundations that support mental health issues estimates that, unless steps are taken now, the increase in “deaths of despair” from alcohol, drugs and suicide could increase by 75,000 as a result of COVID-19.

“Undeniably, policymakers must place a large focus on mitigating the effects of COVID,” says Benjamin F. Miller, chief strategy officer of the Well Being Trust, which published the report in conjunction with the Robert Graham Center for Policy Studies in Family Medicine and Primary Care. “However, if the country continues to ignore the collateral damage — specifically our nation’s mental health — we will not come out of this stronger.”

If you or someone you know is in crisis, help is available. Call the National Suicide Prevention Lifeline at 1-800-273-8255, or go here to chat online.

Fortunately, there are ways to mitigate those risks now, say psychologists and suicide survivors. For example, they urge elected leaders to make it easier for people who are suffering to get access to mental health care — whether or not they are employed.

The National Action Alliance for Suicide Prevention, for example, is now coordinating with other groups in a “National Response to COVID-19.” The campaign, co-led by the head of the National Institute of Mental Health and former Rep. Patrick J. Kennedy, aims to better coordinate and publicize mental health resources for those who are particularly vulnerable right now.

J, for example, is a 33-year-old wife, mother and social worker for whom mysterious illness is a trigger for suicidal thinking. A decade ago, a rare hormonal disease ravaged her body, and she spent years misdiagnosed. That experience nearly broke her emotionally, and she attempted suicide twice.

The pandemic made that trauma vivid again when she came down with symptoms of COVID-19 but couldn’t get access to testing or care.

“We’re in rural Montana, so there’s basically one place I can go,” says J. But it was Good Friday, so the clinic was closed, and she wasn’t sure where to get tested.

J was already laden with anxiety; she worried her hours as a social worker might be cut, leaving her counseling clients without help. (For professional reasons, J asked that NPR use only her first initial.)

“I’m dealing with all these new stressors, and there it is: For the first time in years now, I’m feeling suicidal myself.”

J slept, letting the horrible, familiar feelings recede. She later reached out to friends — a formula that works for her. Eventually, she tested negative for the virus.

But for many other people, the pandemic has changed some of their usual coping mechanisms. 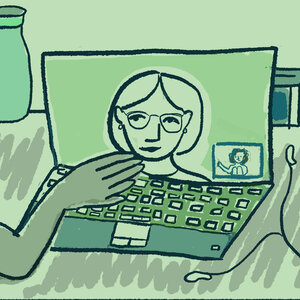 How To Get Therapy When You Can’t Leave The House

“The normal avenues of help aren’t necessarily there,” says Dese’Rae Stage, a Philadelphia writer, photographer and suicide-prevention activist. Stage is looking for a new therapist after hers stopped practicing recently but is finding that many aren’t taking new patients. “It’s already hard to find a therapist who does sliding scale payments or takes insurance,” but the pandemic has made it even harder to find one, she says.

So Stage and other survivors have other recommendations for people looking for help:

Averting the public health crisis of increased suicide attempts is a big and complex challenge. The pandemic has touched off many risk factors all at once, including joblessness, addiction and profound isolation. Suicide experts have studied the effects of trauma, from hurricanes Katrina and Ike to the Great Recession, but this pandemic — with its global geographic and psychosocial reach — could be particularly sweeping, they say.

“The two most replicated, robust factors linked to suicide are economic change — downturn — and social disconnection,” says Dr. Roger McIntyre, professor of psychiatry at the University of Toronto. Those two factors are major hallmarks, he notes, of the COVID-19 pandemic.

McIntyre and his team this week published online in the journal World Psychiatry their research estimate of how the current pandemic and its economic constraints could affect some people.

A Simple Emergency Room Intervention Can Help Cut Suicide Risk
Reach Out: Ways To Help A Loved One At Risk Of Suicide

“If, in fact, the unemployment rate is 10 to 20 percent, we came out at a staggering statistic of over 8,000 additional suicides over and above what would have been expected if COVID never came into our lives,” McIntyre told NPR.

And of course that rate had already been climbing in recent years.

So prevention advocates are doubling down. But addressing suicide is no simple task — it has complex roots.

During the housing crisis and Great Recession a dozen years ago, suicides spiked, for example, but not for a single reason, says Dr. Joshua Gordon, director of the National Institute of Mental Health. Though taking one’s own life is often linked to depression or other mental illness, that’s not always the case.

In looking at data about suicide attempts from those days, Gordon says, “You can see that it’s not just about the eviction. It’s not just about the foreclosure. Most of them have a range of five to 10 other significant adverse events in their lives — many of them financial, but also personal and social — that raise one’s risk.”

Whether you’re grieving the recent loss of someone or dealing with difficulties at home, call someone and talk to that person about what you’re feeling, Gordon and other mental health experts advise. Even small steps like texting someone you know can have a positive impact.

Anja Burcak, who is 25 and lives in Mobile, Ala., says she has been able to manage her bipolar disorder through the pandemic by leaning on her online circle of friends. Many have survived suicide attempts themselves and are helping each other now.

“People unite more,” she says. “I know physically we literally cannot do that, but they might be calling people they haven’t called in years.”

Politifact: Fact-checking ‘Plandemic’: A documentary full of false conspiracy theories about the coronavirus

Celebrate the Return of the Light –...

The primary field of art is living...