We are living in momentous times when women are not just making history, but reshaping history’s narrative. I love reading about women of an earlier era who made a difference, whose courage pushed them forward—when you can find yourself in their story. So I was delighted to read about “The Amazing Women on Titanic”—a two-years-in-the-making event highlighting stories of 19 trailblazing women on board the legendary ship (currently at the Titanic Museums in both Branson, Missouri, and Pigeon Forge, Tennessee.)

Perhaps our fascination with the luxuriously-appointed yet ill-fated RMS Titanic—with a passenger list of some of the period’s most celebrated names and sinking on its heralded maiden voyage in 1912—is as much to do with its compelling life-and-death saga as it is with how the tragedy dramatically punctuated the ending of a gilded era. Just as a bold new century was breaking open, with an outdated culture crumbling, women were to play their part in reshaping a disordered world.

“The Amazing Women on Titanic” features women whose lives echo today’s headlines, as well as our own everyday dreams. There was Edith Chibnall, first-class passenger from England, who had marched with suffragette leader Emmeline Pankhurst in the famous “Black Friday” protest on Parliament in 1910; crew member Violet Jessup who survived this and another ship disaster to write a no-holds-barred book about a working woman’s life at sea; ground-breaking Mennonite missionary Annie Funk, second-class passenger from Pennsylvania who didn’t survive, had founded the first school for girls in Janjgir, India—later named in her memory; and Dorothy Gibson, famous model and pioneering American silent-film actress, the highest paid of her time.

Best-selling author, well-known journalist, travel writer, and single mother of two, Helen Churchill Candee, who cut short a European research trip after receiving word her son had been injured, booked first-class passage on the Titanic to come back home to the United States. One of the nation’s first professional female interior decorators, Helen also wrote eight best-selling books, including How Women May Earn a Living.

Helen had to walk with a cane for a year after surviving the Titanic; she severely fractured her ankle when escaping the ship yet helped row her lifeboat to safety through the icy Atlantic waters. A board member of the National Woman Suffrage Association, Helen used her fame and political connections to further the cause, then in 1913 she led a Votes for Women parade—with 10,000 estimated participants—down Pennsylvania Avenue on horseback to the steps of the U.S. Capitol, the day before Woodrow Wilson’s inauguration. (It was seven more years, however, before the 19th Amendment was passed then ratified, giving women the right to vote.)

Elsie Bowerman, 22-year-old first-class passenger, became one of the first women barristers in Britain and first woman to present a case at the Old Bailey courthouse and win. Elsie served as a representative of the United Nations’ Secretary General, serving on the UN’s Commission on the Status of Women. On board the Titanic with her mother, a militant activist in the suffrage movement in England, Elsie went on to lead women’s suffrage groups until all women won the right to vote there in 1928.

American fashion journalist, importer and stylist, Edith Rosenbaum, 32, had just reported on the fashions at the Paris races for Women’s Wear Daily when she boarded the Titanic in Cherbourg. (Reluctantly because a fortune teller warned her of trouble ahead!) On the night of the sinking, Edith carried a music box in the shape of a toy pig, her good-luck token, and used it to calm frightened children in her lifeboat, twisting its tail to play a popular tune.

Edith became one of the first female war correspondents, reporting from the trenches in World War I (many Titanic survivors were involved in this brutal and game-changing war.) She later changed her last name to Russell when people with “German sounding names” were banned from the couture houses in Paris. During her 95 years, as Titanic expert Hugh Brewster noted, Edith traveled extensively, weathering other catastrophes from car accidents to tornadoes: “I’m accident prone,” she once said. “I’ve had every disaster but bubonic plague and a husband.”

For the spirited Irene (René) Harris—on board with her husband Harry, a leading New York theatrical producer—being on the Titanic had been a joyous experience. However, she slipped on the grand staircase before the formal dinner on Sunday evening, fell and broke her arm (her heel may have gotten caught in her fashionably narrow hemline.) Hours later René had to be lifted and carefully placed in a lifeboat—she made it, husband Harry did not. René took over the family theater business back in New York, becoming the first woman producer of Broadway plays and musicals, backing or managing more than 200 during her two-decade career.

American Margaret Brown—wife of a Colorado millionaire, a miner who struck it very rich—had been in Paris when she received a wire that her grandson was seriously ill and was heading home to be with her family. Margaret was a powerful advocate for human and women’s rights, worked tirelessly for suffrage and literacy for children, historic preservation and, after the accident, the Titanic Survivors’ Committee.

Margaret, at age 44, was called the great heroine of the disaster, taking charge of her lifeboat, organizing the other women to row to keep warm during the frigid night, and guiding them to the rescue ship the next morning. She would become even more famous after her death when Broadway and Hollywood produced musicals based on her life, calling her “unsinkable” and renaming her “Molly.”

But the most famous of the “amazing” women on board Titanic (and the elegant centerpiece of the Titanic Museums’ exhibits in Branson and Pigeon Forge) was Lucy, Lady Duff Gordon. The celebrated British couturiere who, under the name of Lucile, “was known for her innovative and provocative designs plus savvy self-promotion, attracting royalty, socialites and entertainment figures to her coveted brand—women whose influence set the fashions of the day,” explains her biographer (and my costume buddy) Randy Bryan Bigham. “She helped usher in sexy lingerie, looser corsets, and the modern runway show,” he shares in Lucile – Her Life by Design.

To get a sense of the unprecedented scope of Lucy Duff Gordon’s achievements, Bigham remarked that “Lucile was one of the first important female haute couture designers, the first major London-based couturiere, and the first leading designer to open full scale branches in America. She also was the first top name in fashion to do lower-priced lines and to launch perfumes and cosmetics.” (Lucile was so famous during this time, she even got a mention on Downton Abbey, the wildly popular period costume drama—its storyline beginning with the news of Titanic’s sinking!)

By the time Lady Duff Gordon boarded the RMS Titanic in April of 1912 with her husband Sir Cosmo Duff Gordon and her secretary, known as “Franks” (they all survived, but there was a whiff of scandal), Lucy was acclaimed and wealthy—“a celebrity in her own right” with Lucile salons in London, Paris, New York and Chicago, explained Bigham. She was traveling to New York incognito, away from the usual media spotlight that followed her, to be able to rest and relax on the grand luxury liner. Fate, however, had other plans.

For a rare treat, presented into early 2019 as part of “The Amazing Women on Titanic” exhibits, a collection of original Lucile designs is on display: beautiful evening gowns, wedding dresses (worn by the rich and famous), lingerie, accessories (including two fabulous hats), and charming ephemera—most items from Randy Bryan Bigham’s own collection. (Other garments and accessories from FIDM Museum in Los Angeles; Canada’s Fashion History Museum in Ontario; and private collectors Inger Sheil and Lisa Kominek.) A lovely way to honor all women of the era.

I don’t know about you, but reading about women of history, especially women unknown to me, seems to infuse modern life with a certain quality, like a fresh perspective and vitality. It’s as though bringing their lives into my awareness gives me something of their energy, their vision—like they knew I’d be here to carry on. ~ 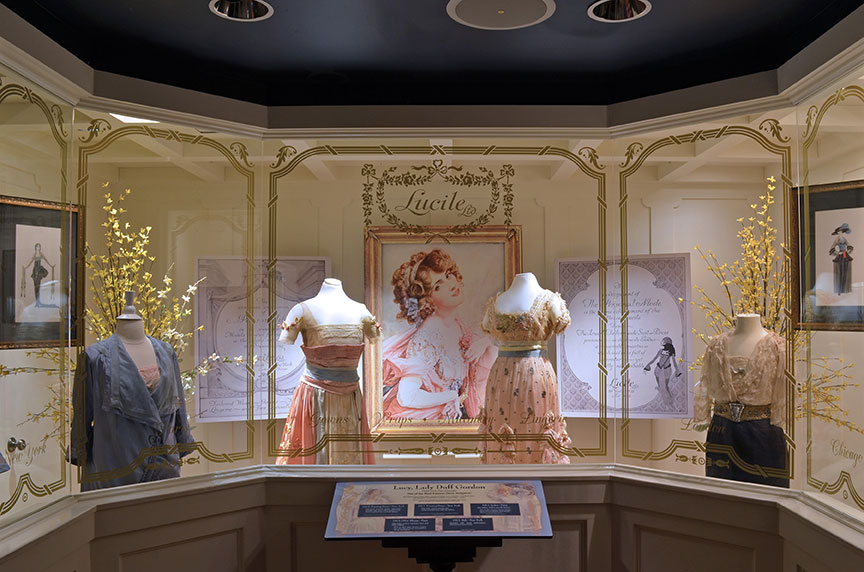 [AUTHOR’S NOTE: For more details about “The Amazing Women on Titanic” and the Lucile design exhibitions: TitanicBranson.com and TitanicPigeonForge.com. And thanks to Titanic author Hugh Brewster and Lucile and Dorothy Gibson biographer Randy Bryan Bigham for informative details. www.CorneliaPowell.com]

The New Royal Marriage: William and Kate, Harry and Meghan

Why Royal Weddings Matter Part 2, “The Scent of Love”

Why Royal Weddings Matter Part 5, “The Whiter Shade of Pale”

Why Royal Weddings Matter Special Edition, “A Day of Gracious Gestures and Love Power: The Wedding of Prince Harry and Megan Markle”

Why Royal Weddings Matter Part 8, “The Language of Flowers”

Why Royal Weddings Matter Part 9, “What the Veil Reveals”

Why Royal Weddings Matter Part 11, “The Honey Month: Dedicated to Harry and Meghan

The Root: I Will Never Forgive White...

Editorial: Regarding Joe Biden and his accusers...

Understanding White Supremacy (And How to Defeat...