In the category of:  #saytheirnames

The photo is haunting, a vivid reminder of the danger many face when they try to cross into the United States. It shows the human toll of a crisis at the border that’s often debated with abstract statistics and detached policy arguments.

The image of the Salvadoran father and his daughter lying face down in the water of the Rio Grande, part of the US border with Mexico, is a heartbreaking testimony to the suffering behind the numbers.
The short life and long journey of the 6-year-old girl from India who died near the US-Mexico border
For months, advocates have been warning that deaths at the border would increase, as migrants are forced to cross in more dangerous areas by US policies that make it harder for those seeking asylum to turn themselves in at ports of entry.
Oscar Alberto Martinez and his daughter, identified by officials from El Salvador as Angie Valeria M., drowned in the currents of the Rio Grande on Sunday as they tried to slip into the United States.
Continue

In the category of:  Daughters of the Patriarchy have been busy

The House Oversight Committee voted on Wednesday to subpoena testimony from White House counselor Kellyanne Conway after a federal agency recommended that she should be fired for repeatedly violating a law that limits the political activities of federal employees.

Chairman Elijah Cummings, Democrat of Maryland, has warned that his panel would vote to hold Conway in contempt if she ignores the subpoena. Conway did not appear on Wednesday on the advice of White House counsel for the committee’s scheduled hearing.
The vote — 25 to 16, with Democrats and Rep. Justin Amash, Republican of Michigan, voting in favor — could set up another challenge in court between Congress and the Trump administration, which has consistently stymied Democrats’ oversight efforts since they took control of the House earlier this year. 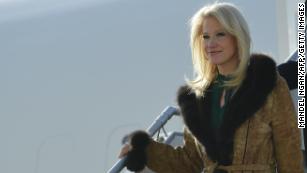 What is the Hatch Act?
“This is not a conspiracy to silence her or restrict her First Amendment rights,” Cummings said. “This is an effort to enforce federal law.”
Continue

In the category of: Two Ring Circus

What to expect at the first Democratic presidential debate

The two-night event will air on NBC on Wednesday and Thursday.

Knowing that the field of candidates would be enormous, the DNC tried to avoid repeating Republicans’ example in 2015, when they featured a primetime debate of the top-polling candidates and an earlier “kiddie table” debate with those polling worse.

So the DNC separated the candidates into groups — those polling at 2 percent or above, and those below that level. They ensured each group would be split equally among the two nights, and then held a random drawing to see which candidates would be on each night.

Now each of these debate nights will be two hours long, with 10 candidates onstage. If speaking time is split equally among every candidate, they’d get just 12 minutes each — and that’s before taking out time for the moderators and for breaks. So time is precious, and the contenders will struggle to make every moment count.

Vox: Democrats have a high-risk, high-reward plan to...

Vanity Fair: TRUMP: NOT LETTING ME SCREAM OVER...