Home Engage What does the current iteration of the Republican Party really want?
Engage

What does the current iteration of the Republican Party really want?

By: Michele Woodward – Confluence Daily is your daily news source for women in the know.

I keep asking myself: “What does the current iteration of the Republican Party really want?”

I’ve learned to pay attention to what someone does more that to what they say. Because when someone says, “I love you” while kicking you in the head – that’s not love, despite the content of the words.

So, what are we seeing with the GOP today?

A commitment to increasing benefits that go to the super rich and dismantling things like Medicaid, SNAP, and other social welfare programs.

A commitment to big business by eviscerating environmental rules as well as limiting the capacity of the IRS to function and the ability of the CPSC to recall faulty products. Among other non-enforcement issues.

A commitment to strengthening the executive branch over others. We see this in ICE, Customs & Border Protection and TSA rules and regulations, as well as in the number of Executive Orders signed by the President.

A commitment to packing the courts.

A commitment to dismantling public education.

The big question: Why?

The only thing I have to offer is this: When poor people stay poor and rich people stay rich, then society becomes static. People are forced to stay in their own lane and there is no challenge to the status quo.

Which is really great if you’re on top.

In this mindset, the world is definitively ordered and a person who’s at the apex doesn’t have to learn anything new. Doesn’t have to experience anything unexpected. Doesn’t have to share a thing, but can exercise selective noblesse oblige at their leisure – the way Betsy DeVos suggested Special Olympics, for instance, should ideally be funded. By “robust support from private donations.”

When the rich stay rich and the poor stay poor, the nobility is intact, and the peasants are seen and not heard. Which is utterly pleasant for the person sitting at the dining table, and not so grand for those doing the cooking.

The aim, then, of today’s Republican Party – it’s gotta be – is to restore the monarchy.

Which was not, if you ask me – in the slightest – the aim of the Founders. 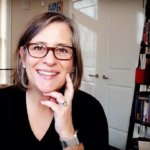 Michele Woodward is an executive coach and writer who lives and works in Washington, DC. A self-described “recovering political junkie”, she worked in Presidential politics for a large chunk of her career before regaining her sanity and becoming a coach and consultant. She urges every American to vote in the upcoming elections.

How to Choose Your Own Adventure

I cannot BELIEVE what Nancy Pelosi did...

Netflix Releases Trailer for ‘Knock Down the...